You are here: Home / PHILLIP’S INSIGHTS / ENGINES OF WEALTH NEWS

Last week the Engines of Wealth team achieved a milestone that I believe is a sign of the changing times, we assisted Valma secure her first commercial property investment. What makes this notable is her tender age of 85 years young. This sale is not a one-off occurrence, prior to that we had helped Kathy, 72 years old and Rod 83 years old secure their first retail shop investments, but at 85 years, Valma takes the trophy.

Most people’s vision for retirement involves simplifying their life with a modest home and lifestyle. Like Valma, for many Baby Boomers and previous generation, the plan was to retire with a lump sum of cash, deposit it into a bank term deposit at 5-6% and live off the interest. The problem for many retirees is that this plan no longer works in today’s economic environment. Plummeting interest rates have impacted term deposits to the point that returns have become untenable, forcing retirees to look in radically new directions to survive.

Rolling forward to 2019 and something serious has gone wrong with this strategy – the bottom has fallen out of interest rates. The Reserve Bank of Australia on Oct 1, 2019 lowered the official cash rate to 0.75%, the lowest level ever in Australia’s history! Adding to the woes is that all messaging coming out of the RBA is that interest rates will continue to fall, so there is no upside in sight for Michelle and others like her. The best deposit rate I found for retirees’ lump sums today is uBank at 1.8% for 6 months.

I speak with lots of people like Michelle that have followed this same retirement plan. This age old, seemingly low risk, term deposit strategy that has worked from the 1960s to just a few years ago. What has happened over the past 5 years was not anticipated and as a result many are now enduring a brutally hard retirement lifestyle. 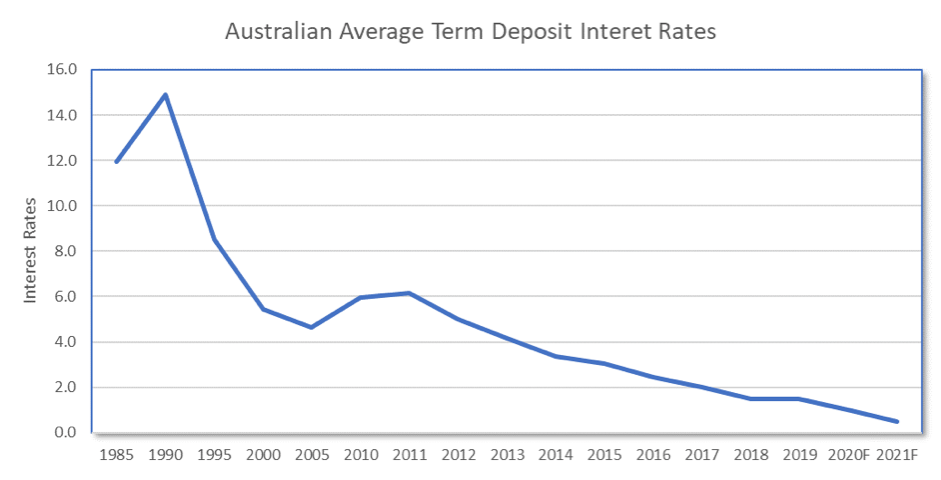 The graphic below details the fall in term deposit rates over the past 35 years and really brings home the problem that many older Australian’s are facing.

People in their 70’s and 80’s assumed their investment nest egg of cash in the bank would generate them enough money to live on. In 1985 they would have been getting 12% on their money and in 1995 they would have been earning a tidy 10%. Fast forward to today and retirees are now only getting around 1.5 – 2.0% on their money, that’s not enough to live on. For Valma, Kathy and Rod they were faced with spending their nest egg or seeking alternative ways to generate a return, this is what led them to the Engines of Wealth team to investigate purchasing a commercial retail shop.

I interviewed Kathy after her purchase as I was intrigued to understand the drivers that led a 72-year-old retiree to buy her first retail shop. Her reasons were twofold, firstly, she realised she could not live on the interest her money was generating in the bank and that meant she needed to spend some of her nest egg each year to survive. Kathy’s decision to invest her money in a retail shop at secure 6.5% cash flow return, meant she would now be generating sufficient income for her to live on without eating into her nest egg.

The second driver for Kathy was protecting her children’s inheritance, Kathy had benefited from an inheritance from her parents and hence it was extremely important to her to also leave something for her children. It comforted her to know she would be able to leave them the legacy of an income generating shop, that was increasing in value each year as the rent increased.

There is a growing number of retirees suffering from what is happening with interest rates and the solution needs to be something other than traditional, low risk investments like bonds and term deposits. This older generation is particularly sceptical of turning to the stock market, as they experienced the GFC and know how volatile local and global financial markets are at the moment.

I am glad that by reading my book, Engines of Wealth and then contacting me, I was able to help improve their livelihood and ultimately empower them with the knowledge and confidence to change their investment strategy. Kathy and Valma both said they are delighted to have secured a safe, steady income stream from their commercial shop and take comfort in knowing their money is protected in bricks and mortar, both have dramatically reduced their stress levels, they are now no longer worried about their future prosperity.

I would like to finish with a photo of a very proud 85-year-old Valma, in front of her shop. Congratulations Valma, an outstanding achievement. 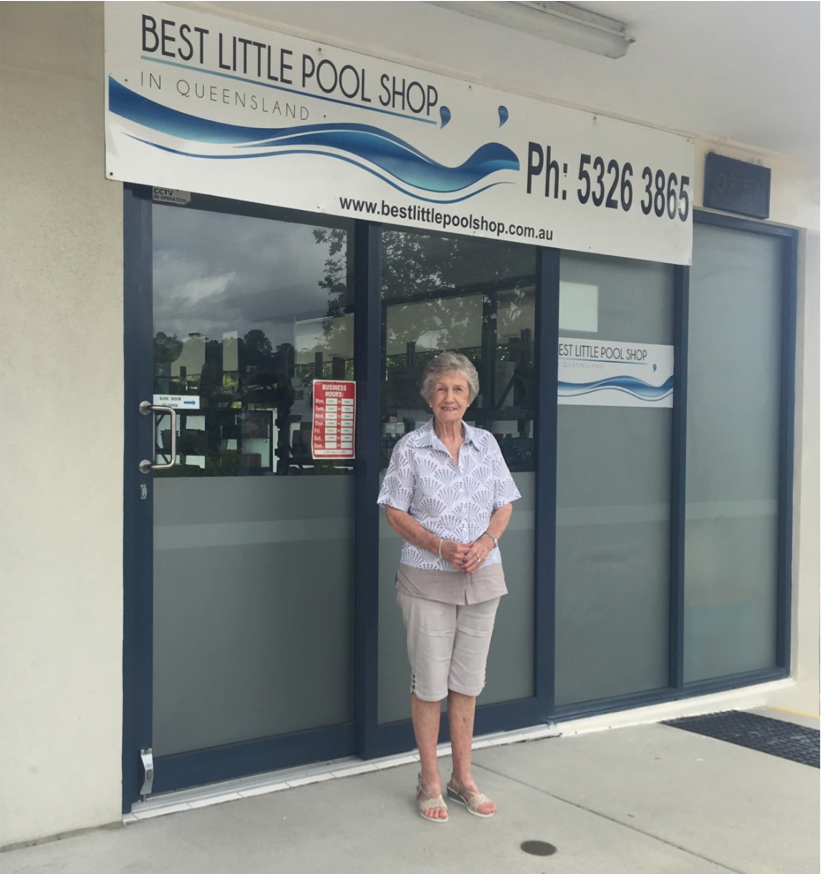 We are thrilled to be featured in todays edition of the St George & Sutherland Shire Leader!

We were recently interviewed by The Leader regarding our book and thoughts on the Australian property market.

As the title states, we believe that you shouldn’t give up on your home ownership dream! You just need to rethink your investment strategy.

Our book outlines the steps we took to building financial wealth and security. We go into explicit detail on how you too can build this wealth and positive income stream for yourself! 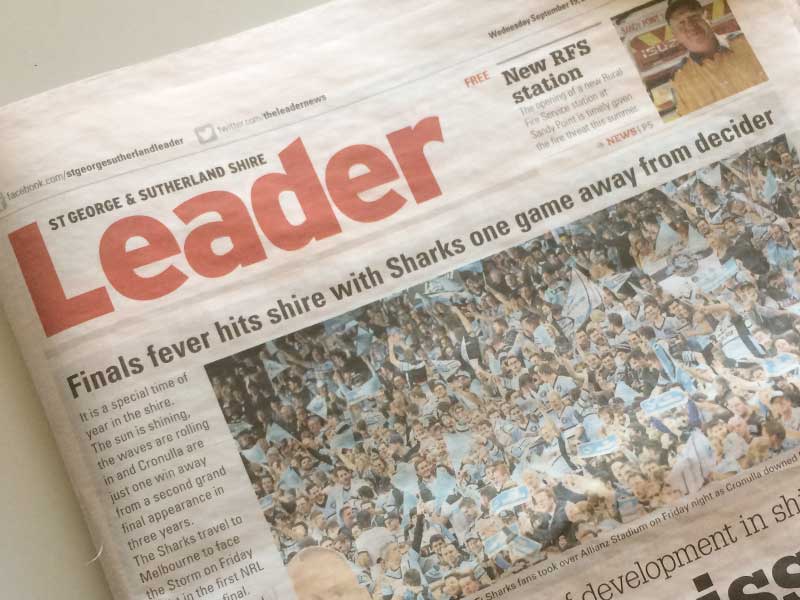 We were recently interview by The Leader and questioned about our views on commercial real estate and first home ownership in Sydney. In recent years Sydney property prices have sky rocketed. This has resulted in a lot of first home buyers unable to get into the market.

One of the key reasons we selected commercial retail shops as the foundation of our wealth engine was due to the low maintenance aspect of these shops. In fact the only real major items of plant and equipment that is the responsibility of the landlord to fix is the hot water system and the air conditioner. The hot water systems are typically not that expensive at around $1,000 installed and will last between 8-10 years. So whilst it’s a good idea to understand how old the hot water system is it typically won’t be a factor in your property due diligence. END_OF_DOCUMENT_TOKEN_TO_BE_REPLACED

One of the key things I like to see when buying a retail shop is a long lease. Not only does a long lease offer you security over future rental payments it wins the banks confidence in the asset as it presents with a higher WALE (Weighted Average Lease Expiry). In Engines of Wealth we discuss the WALE of a building as a measure of the lease term left to run. END_OF_DOCUMENT_TOKEN_TO_BE_REPLACED

In my opinion Depreciation is the secret sauce when selecting retail shops as our wealth building engine. Our wealth building strategy is to create a long lasting income stream that is indexed to inflation and tax effective. END_OF_DOCUMENT_TOKEN_TO_BE_REPLACED

A guarantor must be identified on the tenant’s lease, it could be the tenant or a friend/relative. A guarantor should be a person that has suitable assets to provide security over future rental payments. The subject of a guarantor is not only an important consideration at the time of purchasing a property, it is also important when a tenant has decided to sell their business or assign the lease to another party. END_OF_DOCUMENT_TOKEN_TO_BE_REPLACED

As mentioned a few times in Engines of Wealth, I own seven Hairdressing salons and would gladly have more, they make dependable tenants. With that many hairdressing salons in my portfolio I am keen to learn more about their business, so I interviewed a local Hairdresser/Barber to gain greater insight and improve my investment calculations. END_OF_DOCUMENT_TOKEN_TO_BE_REPLACED

In Engines of Wealth I discuss at length how to interact with real estate agents from a buyer’s perspective, but when considering them as a tenant and agencies are one of my preferred tenants, there is a twist. When considering the viability of a real estate agent in your shop first you need to ascertain if they are among the 90% that sell residential properties only. Remember the catch-cry “Location, Location, Location”, all areas are not equal and if your shop’s neighbourhood is not providing attractive prices or has too much competition then a real estate agency may struggle. END_OF_DOCUMENT_TOKEN_TO_BE_REPLACED

I recently assisted a fellow investor acquire his first retail shop. We found an ideally priced Thai Massage centre in Maroochydore QLD that was opposite a popular beach and caravan park. The gross rent was $21,350 per annum and the outgoings were $7,220 per annum leaving a net annual rent of $14,130.